With an investment  about R $ 5 billion, the Transmission Line ± 800 kV UHVDC Xingu-Estreito-Bipolo1 has a length of 2,076 km, starting in Pará, (PA), crossing Tocantins (TO) and Goiás (GO) until reaching the south of Minas Gerais (MG), passing through 70 municipalities. The project also includes two 4000 MW capacity converter stations, two ground electrodes and their respective transmission lines with 36km in the state of Pará and 72km predominantly in the state of São Paulo, six telecommunication repeater stations and seven maintenance centers, other associated facilities.

Belo Monte Electricity Transmission (BMTE – Belo Monte Transmissora de Energia) a Specific Purpose Society (Sociedade de Propósito Específico – SPE), it was compounded by the Chinese State Grid Brazil Holding which holds 51% for its participation; and by the Brazilian ones – Eletrobras subsidiaries – Furnas and Eletronorte with 24,5% each, was responsible for the construction .

Brazil started the construction of the first Ultra High Voltage Line, which will transmit the energy from the Belo Monte Hydroelectric Plant (11.233MW) to the big energy consumption centers of the country. The structures of the Direct Current Line between Xingu (PA) – Estreito (MG), will be the first 800 kV line of the country, totaling 2,087 kilometers in length.

The project with these features, has few precedents in the world, and it is being constructed in eight stretches. With about 2,200 employees, the works are in full operation and the land process is almost complete. The Xingu Converter Station has 403 employes, which have completed the earthworks and already doing the Civil Works. In the Estreito Converter Station was already started the concreting of the transformer base’s foundations and is already on the Valve Hall erection phase. And on this phase have approximately 180 employees.

The Forecast for the start of operation is on February 2018, with efforts for early completion for December 2017 to not restrict the flow of the energy generated in the Belo Monte Hydroelectric Power Plant. 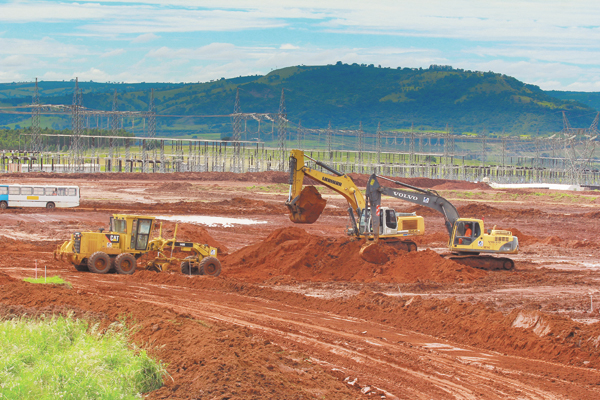 Government approaches Gurupi Entrepreneurs to the Company BMTE Responsible for Work of Large scale in the region
Posted on October 16, 2015

Entrepreneurs of Gurupi and surrounding area, as well as representatives of organizations and institutions dedicated to the business sector, attended the evening of Tuesday the 6th, meeting with representatives of Belo Monte transmissora de energia ( BMTE ) . The event, sponsored by the Government of Tocantins – through the Secretary of Economic Development and Tourism ( SEDETUR ) – was held at the shopkeepers leaders Chamber ( CDL ) in Gurupi . The company is responsible for implementing the Xingu Transmission Line (PA ) / Estreito ( MG ) , a large project to be implemented to transport the power generated at the hydroelectric power plant ( HPP ) Belo Monte.

The government of the state of Tocantins , Paraiso and promoted ACIP promoted meeting late on Wednesday, 7 with company representatives Belo Monte Power Transmitter ( BMTE ) and business community of Paradise and region.